Despite travelling from one floor to another in Orchard Central, it never crossed my mind to go to the rooftop of the shopping mall. When I did, I found Joie Restaurant, where modern, meatless French-Japanese cuisine is served. 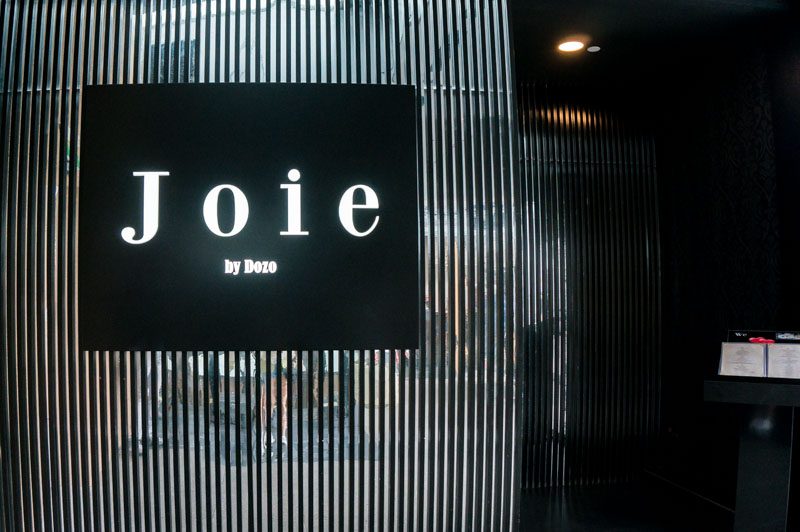 As soon as you reach the chic entrance of the restaurant on the 11th floor, drop your misconceptions about vegetarian food because owner Huang Yen Kun will draw you into a world of unorthodox and refined creations.

Pronounced ‘joy’, Joie aims to uplift meatless cuisine with carefully selected vegetables, fruits and herbs that go into state-of-the-art natural fare for not just vegetarians, but also meat-eaters like me to enjoy. 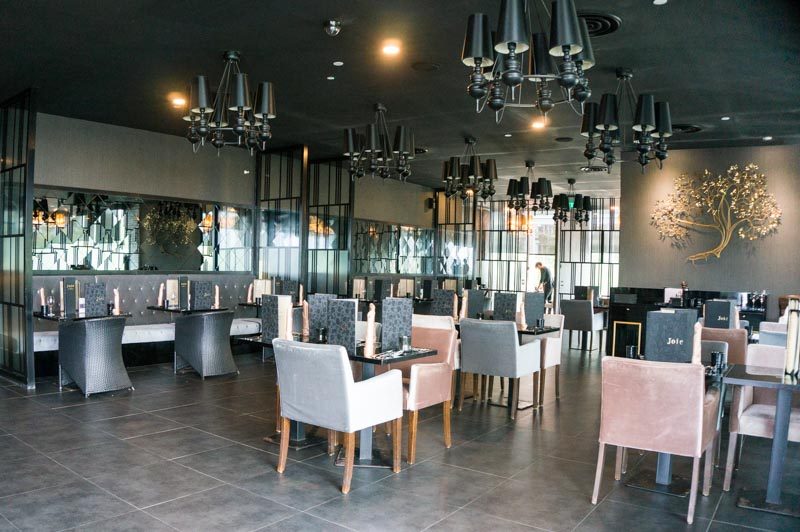 The bronze-grey walls of the interior conjured up an air of elegance, while plush leather quilted banquettes and velvet armchairs added a slightly regal charm. 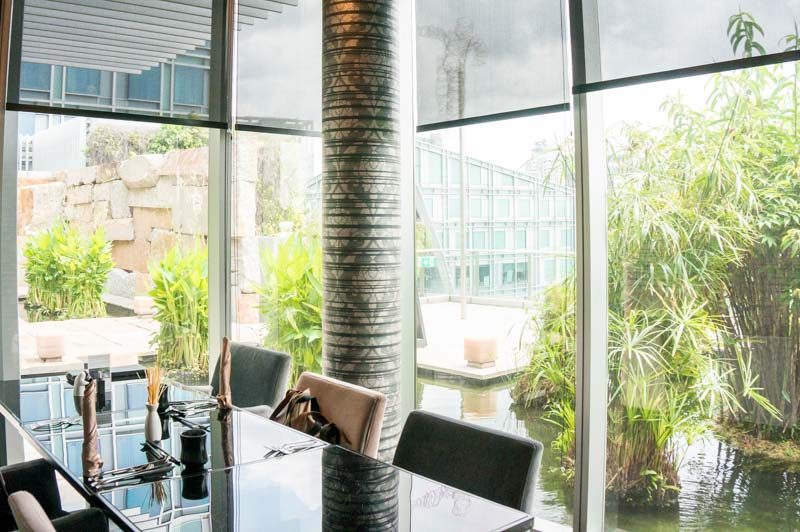 At no additional cost, you can also dine in one of the five private rooms which seats four to sixteen guests with a full view of the serene rooftop garden and koi pond. To cleanse our palates, we were given complimentary refreshing passion fruit drinks and were kindly asked by the staff about any dietary requirements.

When the Chef’s Selection Of Assorted Platter came, I knew this lunch experience was going to be a memorable one.

On an elongated granite plate lay a seaweed crisp with dollops of wasabi mayo and fruit puree, a carrot sashimi topped with garlic sauce and a string of sea grapes, and a raspberry sphere on a pistachio cracker. 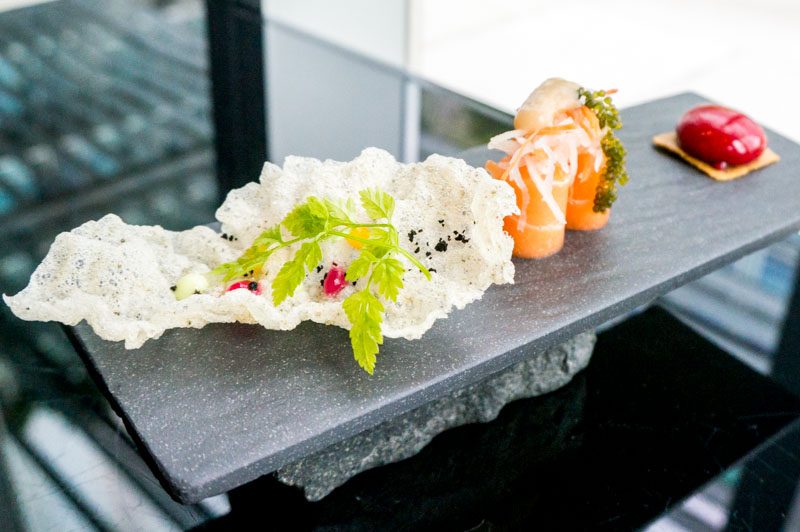 The seaweed cracker was airy and chewy, accompanied by the sweetness from the fruit puree and mild spice from the wasabi. While it was a good tidbit, I was drawn to the carrot terrine.

Visually, the “sashimi” resembled rolls of fresh salmon. Taste-wise, it was konjac-like and somehow reminded me of the naruto fishcake served with udon — how could carrot taste like this?

As for the raspberry sphere, I’d recommend to have it in one go as it bursts in your mouth with a pop. The raspberry was surprisingly not sweet but sour with a hint of bitterness, and the cracker gave a salty bite. 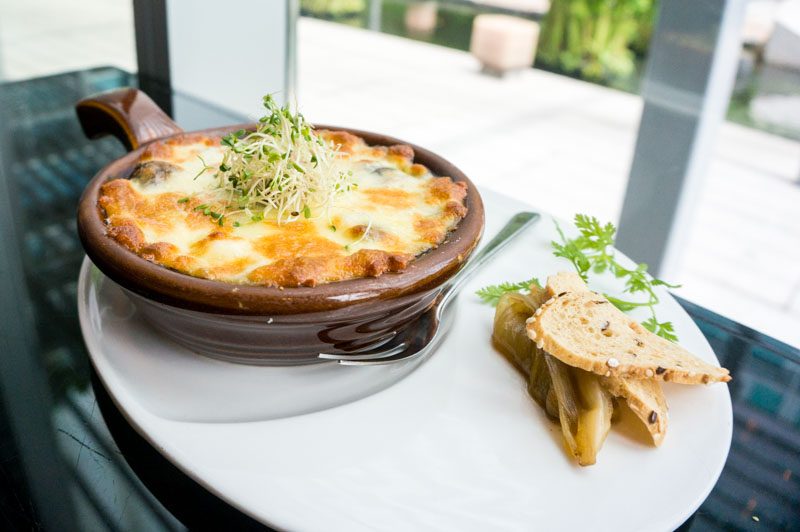 For the sides, we had the Gratinated Champignon With Mozzarella which came in an escargot bowl with crispy bread lying on honey-soaked Belgian endives. 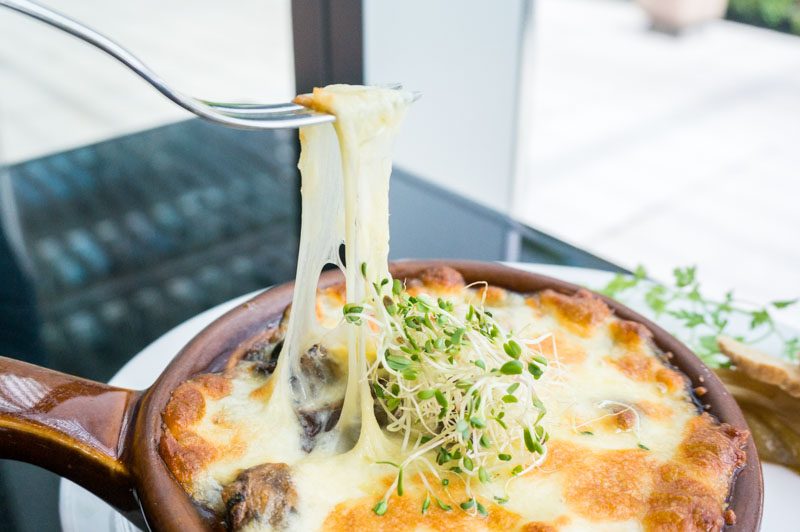 The perfectly golden-brown crust of gratin encircled the dish and when lifted, the cheese-pull game was strong. And in each concave of the bowl was juicy and chewy button mushrooms which worked really well with the mozzarella. 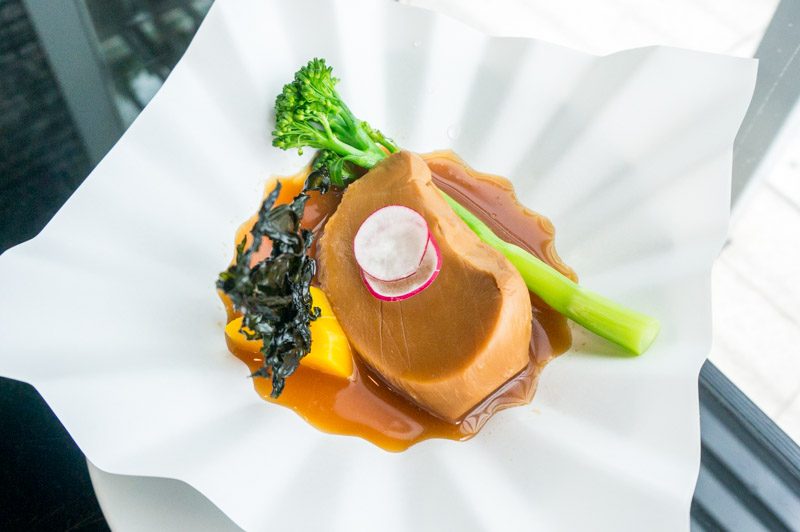 In the middle of a nicely folded paper of a sunburst pattern, the Bailing Mushroom On Paper Hot Pot was served with a slow-braised Bailing mushroom and pumpkin, fried seaweed and veggies on the side. The mushroom was soft and the sweet soup flowed out in every bite. While it was a comforting dish, it was quite ordinary. To elevate the flavours, you can soak the seaweed in the soup to further deepen the umami of the dish. At first, the Infusion Of Cepes And Truffle was presented with a lid on and once lifted, the strongest fragrance of truffle spread throughout the room. 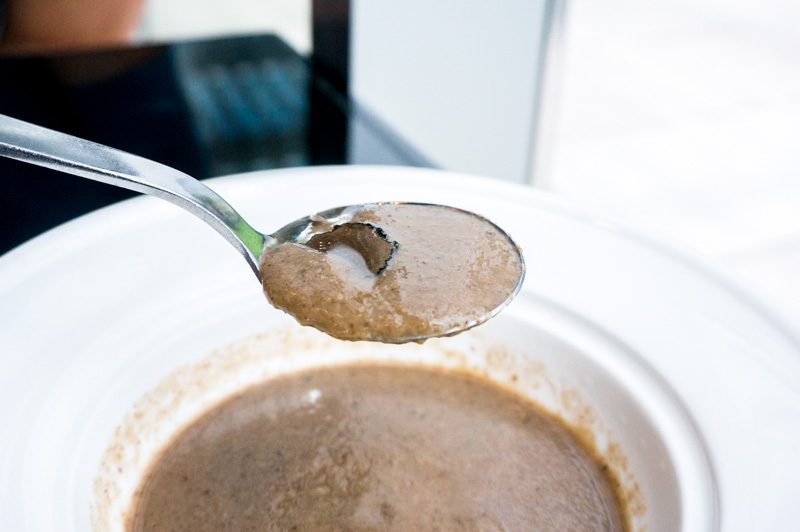 The soup’s consistency was murky and grainy as the cepes mushroom glazed over my tongue followed by a mild truffle fragrance from the small piece of black truffle drizzled with white winter truffle oil – this was what mushroom soups should aim to be. 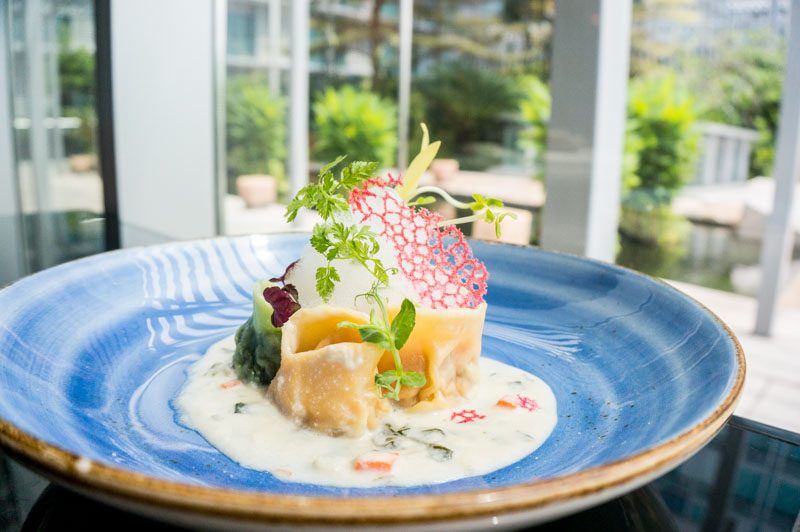 The Duo Ravioli Platter was yet another testimony to the restaurant’s creative attention to plating: on a pool of cream sauce, the sweet pumpkin and spinach ravioli were arranged in a circle topped with fluffy truffle foam.

In order to cater to diners who can’t take dairy, the cream sauce was made with cashew nuts. Utmost care for customers? Check. Aesthetics? Check. 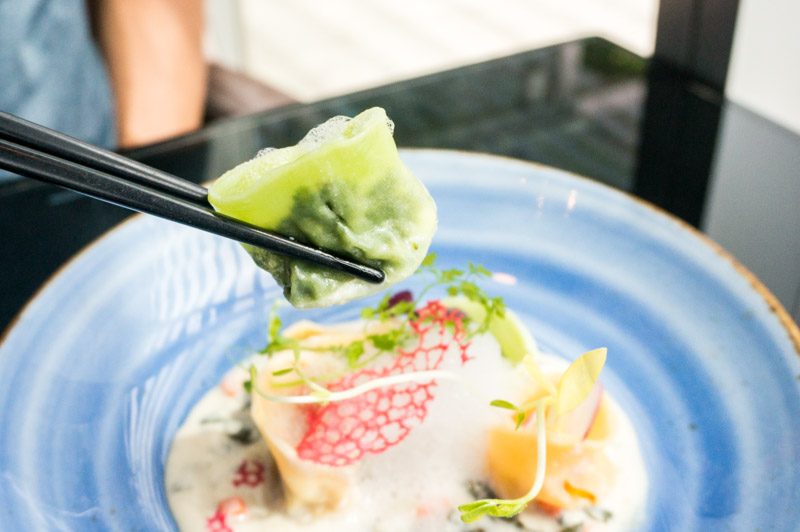 While the truffle foam wasn’t pungent, the ravioli was definitely packed with flavours. The spinach ravioli encased a mashed spinach and a tangy ginger filling, its skin soft and thinly stretched.

As for the sweet pumpkin ravioli, pumpkin seeds were added to give it a fun texture, with the herb garnishes brightening up the creaminess of the pumpkin. 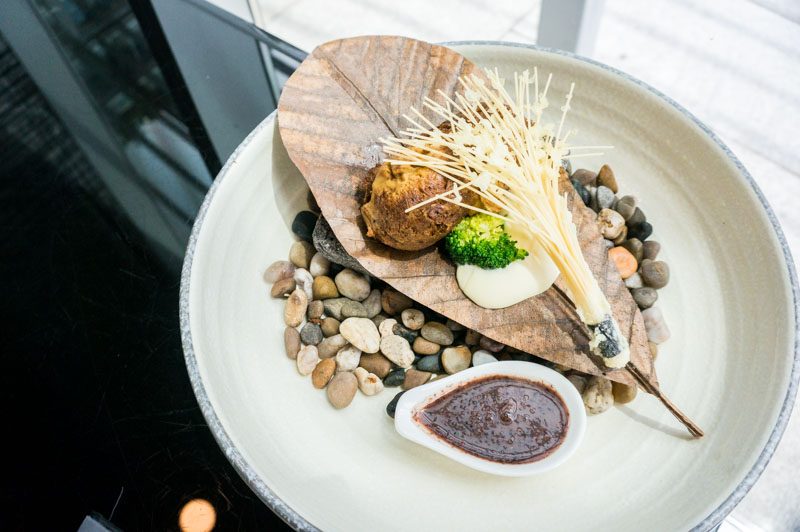 For meat-lovers, you’d be wondering about the word “steak” in this Grill Summer Mushroom Steak On “Pu-Ye” Hot Stone.

Placed on a wide leaf, the steak of grilled mushrooms came with truffle mashed potato and broccoli, embellished with deep-fried spaghetti held together with nori. The pu-ye hot stone kept the dish hot and came with a dipping sauce of mustard. 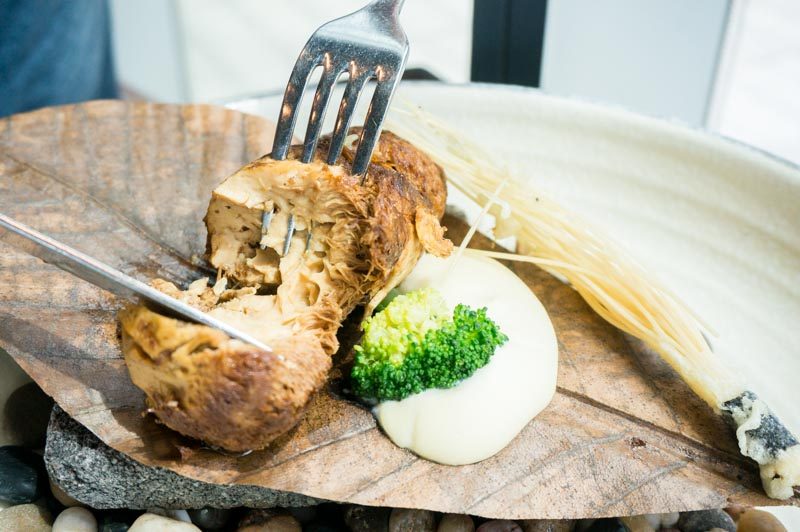 Acclaimed for its medicinal properties, digging into the grilled monkey head mushroom was like cutting into steak — but the real question was, did it taste like steak?

Not only was the mushroom spongy and juicy with sweetness, but had pleasant notes of smokiness from the grill. Honestly, I forgot it was a meatless dish as each mouthful was fulfilling, earning two thumbs-up from me.

On a side note, the truffle mashed potato had a strong truffle flavour, which prompted me to scrape it all off the leaf (careful not to eat the leaf though). 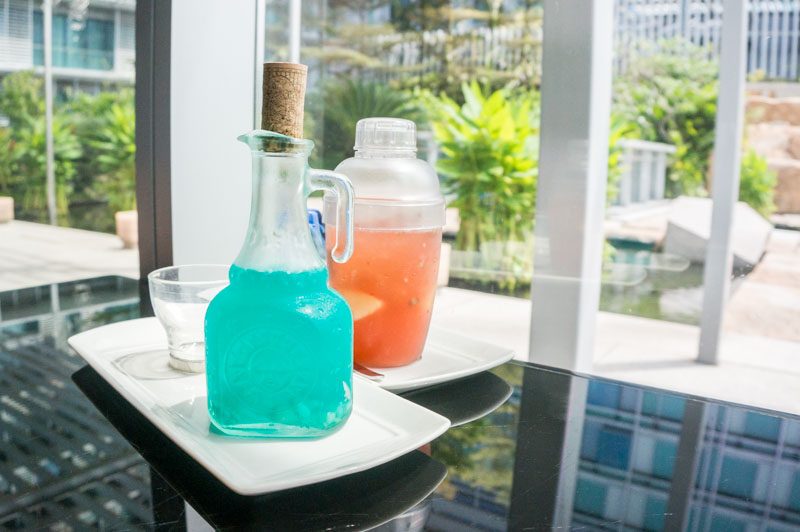 Before the desserts arrived, we had cool drinks of Hawaiian Blue and Iced Mallow Apple Melody, sporting a neon blue and bright orange colour respectively. 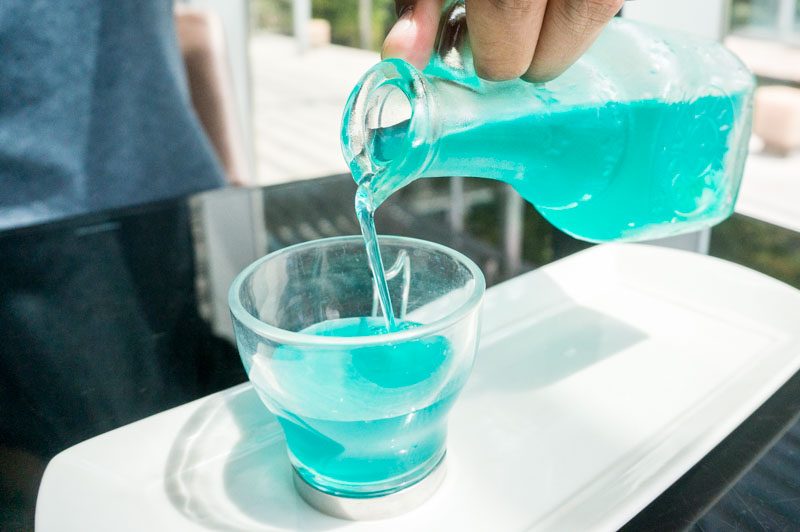 Concocted with lychee and blueberries, the house mocktail had bits of lychee lining the bottom of the jar. I couldn’t taste the blueberries but the lychee was overpowering and perfume-like with its syrupy sweetness, which wasn’t to my liking. 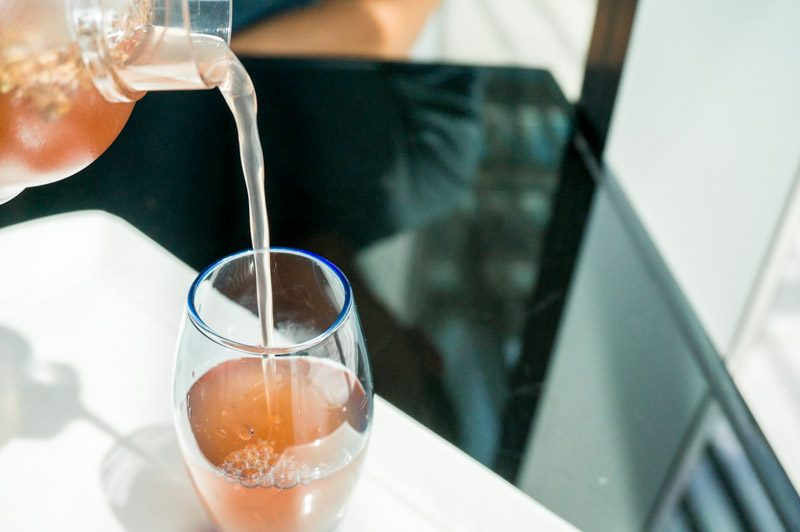 The Iced Mallow Apple Melody, however, was delightful with chunks of apple, dainty mallows and guava juice blended together for a rejuvenating and not overly sweet drink to quench my thirst. When I read Liquid Chocolate on the menu, I imagined a chocolate drink or even a lava cake of some sort. Instead, a thin rectangle of chocolate mousse adorned with raspberry crunch and dehydrated guava crisp was placed on the plate with pistachio crumbs and applesauce.

A spoonful of the milk chocolate easily melted in my mouth, contrasting against the tartness of the raspberry. 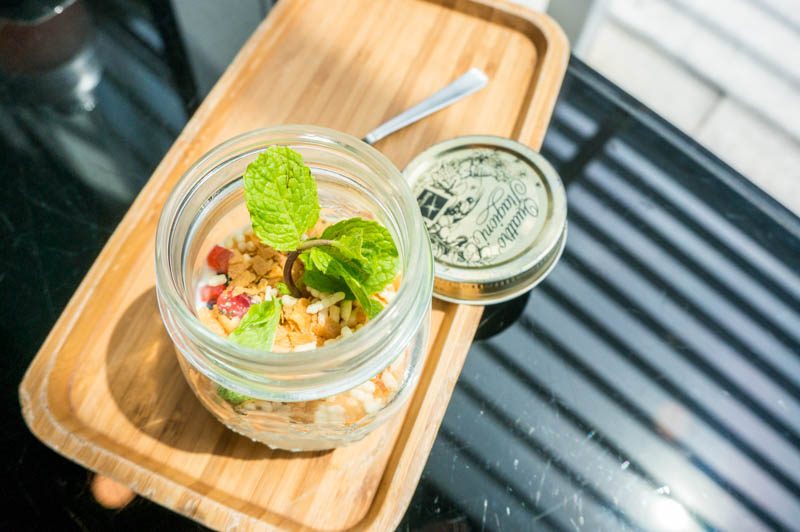 Served in a mason jar with fresh blueberries and strawberries, cornflakes and chia seed, the Yogurt Pudding came next as a dessert. 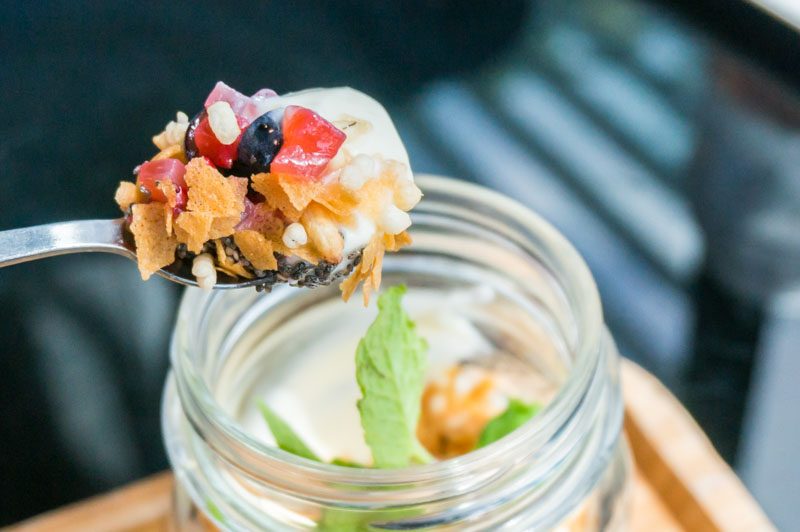 While I do enjoy my daily yogurt, this yogurt pudding leaned towards the sweeter side with not an ounce of sourness which was slightly lacking for my taste.

But the crispy cornflakes along with the fruit chunks added more dimension to the dessert. To finish off the meal properly, you can nibble on the mint leaves as well.

Amidst the rooftop garden at Orchard Central, Joie was a charming hideaway to unwind from the hustle and bustle of the shopping district.

Every dish is sophisticatedly executed with premium ingredients, allowing guests to leave behind their pre-existing ideas about vegetarian fare and truly appreciate their innovative creations. It was a joie indeed.