Mee rebus is one of the most under-the-radar Malay dishes of all time. This deceptively simple concoction of boiled (rebus) yellow noodles and viscous brown gravy is often relegated to the enjoyment of slightly older folks.

There’s a reason why most authentic mee rebus stalls/recipes are at least 5 decades old (or even older). This dish is just meant to be enjoyed from generation to generation. I’ve made your first step of mee rebus wokeness easier with 10 legit mee rebus spots that will have you bowl-ing for more! 1965 was the year Yunos N Family first started out, and this year is also significant in our history, as it’s the year Singapore gained independence. It was started by the late Haji Yunos Ahmad as a push cart stall at Hastings Road, though now you can now enjoy a bowl of mee rebus at 724 Ang Mo Kio Avenue 6. Not only does it boast history behind its bowls, but Yunos N Family also offers over 9 mee rebus variations, including Mee Rebus Tarik (S$6.90) which is mee rebus with satay sticks and Mee Rebus Ribs (S$7), which has ribs that are slide-off-the-bone tender. Their satays (S$0.80 per stick) were pretty good too. Many residents of Bedok will be aware of the “fat lady” that manned Inspirasi even after passing the business over to her brother. Mdm Saoana is the unofficial mascot of Inspirasi, as she has served cheap and delicious mee rebus since she was 14 years old — when it was sold from a trishaw! Since then, a bowl of mee rebus has increased its price to S$3, but what hasn’t these days? However, the mee rebus gravy has lost none of its potency. It is made specially from chicken bones stock, dried anchovies, sweet potatoes, fermented bean paste and curry powder, just as how it was 50 years ago! And every ounce of that fact is translated to her rendition of Mee Rebus (S$3.50). I found the gravy to be satisfyingly spicy by design. Its addition of mini fried tofu, beansprouts and soft-boiled egg helped elevate the already delicious bowl to a must-try with its contribution to both flavours and textures. If a hawker stall claims to be a favourite of both former Prime Minister Goh Chok Tong and the late former President S R Nathan, then you know you’ve probably got the real deal. That’s exactly the case with Rahim Muslim Food which has been open since 1957! What sets it apart from other mee rebus stalls is its incorporation of satay sauce with every order. The normal Mee Rebus (S$3.50) comes with egg and crunchy and nutty satay sauce. Its other sets, Mee Rebus Power (S$5) and Mee Rebus Extra Special (S$6.50), come with chicken, with the latter serving a drumstick chicken on top of the mee rebus!

Not all good mee rebus is situated at hawker centres which, understandably, might not be everyone’s cup of tea with its usually warm setting as well as questionable hygiene standards (at times). That’s where Lina’s Cafe comes in with a modern cafe setting.

Despite the modern setting, its mee rebus recipe is anything but, with it being an original recipe from the 1970s. The Mee Rebus Special Mak Timah (S$5) comes with a mini begedil as well as a number of noodle choices such as Yellow Mee, Kway Teow or Bee Hoon. There’s also Pasta Rebus (S$6) that’s penne with mee rebus gravy.

As an additional bonus, Lina’s Cafe is both autism-friendly and aims to spread awareness of autism! There’s something quite charming with how Warong H.J Sukarjo uses old Malay to spell out mee rebos. What’s equally charming is how the stall has been run by two makciks, who are sisters, for over 43 years! Their stall is located within The Marketplace @ 58 and is only open for 3 days a week. Warong H.J Sukarjo’s Mee Rebus (S$3.50) is your standard good mee rebus affair. It is also generous with its toppings such as cubed tofu, fried shallots and spring onions. Its sauce is also nutty and creamy and is expertly balanced with its sweet and salty notes. However, the addition of sweet sauce adds an additional umami finish to your mee rebus! Unlike one of the previous entries, Hj Waliti Hj Mazuki actually has a photo of the late former president S R Nathan with, presumably, owners or cooks from the stall. If that didn’t capture your eye’s attention, then the prices will certainly do, with the cheapest item being the Mee Rebus without Egg (S$2.50). If you want the complete mee rebus experience, you can opt for the OG Mee Rebus for a measly S$3. Surprisingly, the sauce is cooked with pieces of mutton to further enrich the typically rich and savoury mee rebus gravy. If for some reason, mee rebus isn’t your thing, there are plenty of other Malay dishes at a very affordable price! 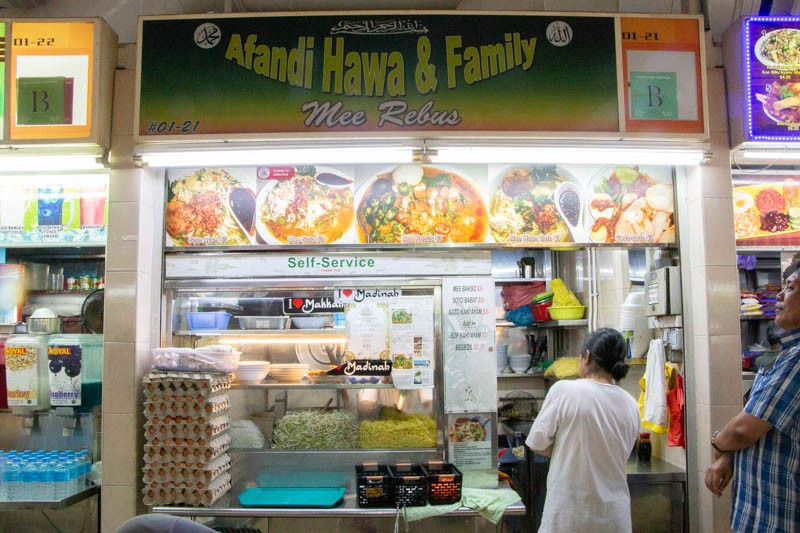 Located opposite Hj Waliti Hj Mazuki, Afandi Hawa and Family Mee Rebus was founded by Afandi Ahmad at the old Paya Lebar Airport in 1967. It is currently run by his son, Ahmad, a second-generation owner that took over the business in 2008. It probably has the most unique way of making mee rebus gravy by using a combination of ingredients such as shrimp, flower crab and mutton. A bowl of Mee Rebus costs S$3, which is dirt cheap when you consider the number of ingredients used for the gravy. And it’s not just for numbers as the extra ingredients add a sweet and savoury flavour. There’s also a slight brininess from the shrimp and flower crab. You know your food is next level when people want to recreate them, and Warong Pak Sapari allows this by offering both its mee rebus and soto paste which is literally the first thing you see when queuing for a bowl. Don’t let that deter you from getting a bowl from the source though as this stall has been going strong for 5 decades!

Every Mee Rebus (S$3.80) looks deceptively simple and similar to one another but the taste will sway you, and this definitely will. When I had it, the sauce was slightly heavier than your usual offerings. Yet again, the fried tofu and boiled egg added so much to the overall Mee Rebus flavours. Their Mee Soto (S$3.80) was also very well done. Hassan Stall’s story almost reads like a script from a local drama. Starting out as a makeshift stall in the late Hassan’s kampung house in 1959, it was also one of the first stalls to be opened in Changi Village Hawker Centre in 1975.

The stall is now manned by his son, Azman, his younger sister, as well as his aunt, who will be the last generation to continue the business as no other family members are interested in continuing it. Azman has gone through many obstacles such as serving drug addicts, motorcycle gangs and prostitutes (all prominent at that time). There was also an instance where a big fast food chain offered him S$0.50 per plate to use his mee rebus gravy.

Thankfully, its Mee Rebus (S$3.50) is a wholesome experience. Thick sauce, chunky pieces of fatty beef and a recipe that other aspiring stall assistants can’t replicate even with instructions, this is definitely history in a bowl.

Queenstown Lontong: Delicious bowls of lontong since 1960s that’ll get you...