You’d never expect it, but hidden right within the heart of Chinatown is a new gorgeous French restaurant that oozes romantic date night vibes. Opened in June 2022, The Venus offers contemporary French cuisine with an Asian twist, so if you’re looking to impress a date, this is the place! The Venus is located right at the corner of South Bridge Road and Upper Cross Street, and it’s certainly hard to miss.

The minute I turned the corner, I spotted a long corridor framed by marbled tabletops and sleek black high chairs with netted rattan seats. Large window panels lined the space, which was dotted with refined gold accents. Once I stepped in through a large wooden door, there was a quiet hush that covered The Venus. For a second, it didn’t feel like I was in bustling Chinatown.

The space was gorgeous, especially during the day. Plenty of soft natural light was streaming through the large window panels, and relaxing jazz music was playing in the background. Plush sage-coloured booth seats line one side of the restaurant, making it a really intimate seating area.

Inspired by the Greek goddess Venus, the vibes were immaculate: soft but sleek, romantic yet classy, charming and intimate all at the same time. It made me wish that I had come here with a date instead (hint, hint), and I couldn’t wait to get started on the food.

What I tried at The Venus While The Venus offers a concise à la carte menu, we were here to try its set lunch menu. We started the ball rolling with our first appetiser of choice: Soup of the Day. We were served the Cream of Corn, which came with chargrilled baby corn with Xi’an spice. While most Cream of Corn soups tend to be thick and sweet, The Venus’ rendition of this popular soup was more refreshing than indulgent. I could taste the natural butteriness of the corn, and thick chunks of baby corn and corn kernels within the soup added a nice crunch with each sip. For our second appetiser, we decided to top up S$5 to get Angel Hair, which is a chilled noodle dish comprising angel hair pasta, ikura, Kaviari caviar and tobiko.

The minute the Angel Hair was served, I could immediately smell the heady scent of truffle. Just based on looks alone, I was already impressed— the sight of perfectly twirled angel hair pasta and the little pile of ikura, caviar and tobiko was simply beautiful. Was it as delicious as it looked? A definite yes.

I took my first mouthful of Angel Hair and was blown away by how aromatic this entire dish was. The truffle was earthy and intoxicating, and paired well with the coldness of the silky angel hair pasta. To top it off, the little pops from the ikura and tobiko added a fantastic texture and sweetness to each bite.

It was so good that both my dining companion and I wished that The Venus had turned this into an actual pasta dish. We moved on to our first main course of the day: The Venus’ Iberico Pork Sirloin, which came with a sweet & sour sauce, roasted potatoes and kale. 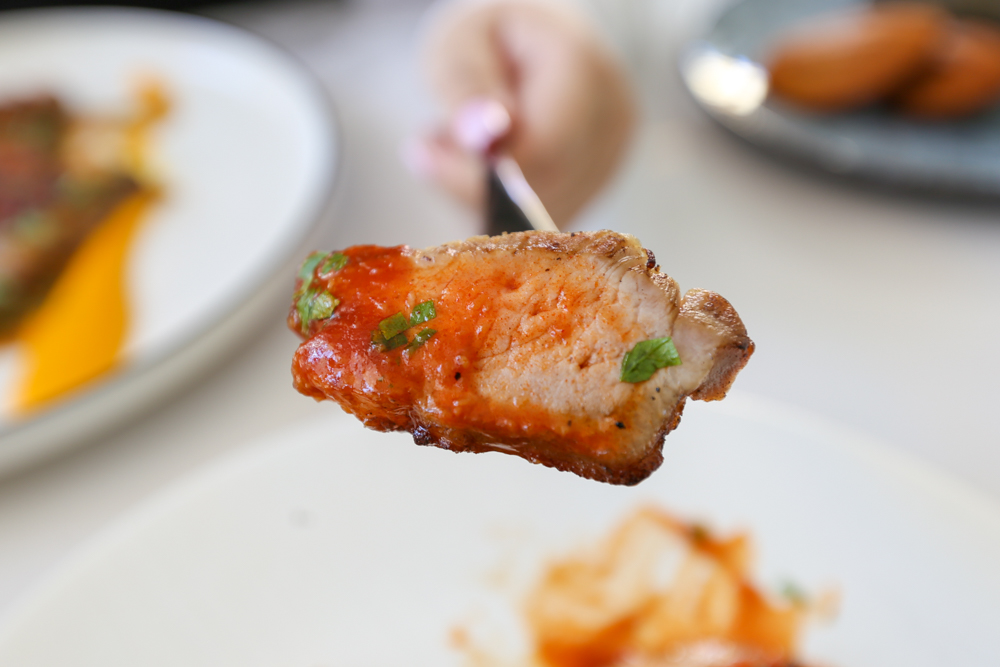 The Iberico pork sirloin had a great crust while the tender meat had a good bite to it. I loved that I could taste the seasoning on the pork sirloin, and relished in the subtle notes of black pepper and salt.

The biggest surprise of all was the sweet & sour sauce. I expected it to hit in a bright and acidic way, just like it would with the sweet and sour pork dishes at zi char places, but The Venus’ take on it was more subtle. It was tangy and mildly sweet, with a strong hint of tomato paste.

Completing the dish were the little bite-sized potato cubes, which I popped into my mouth eagerly, and the leafy kale, with its salty and savoury flavours. 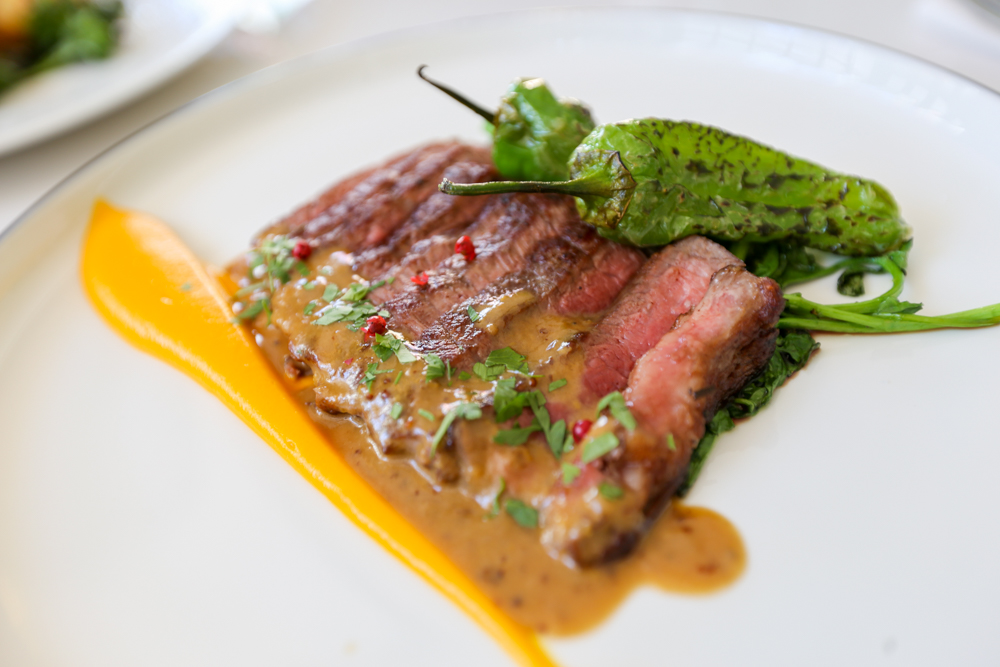 The second main course we got was The Venus’ Black Angus Beef Ribeye (additional S$12) in medium rare doneness. Accompanying the steak were watercress, Padron peppers and five-spice mustard jus. This was one of the rare times where I took my time to savour the meat without pairing it with any sauce, because the black angus beef ribeye was incredibly tasty. I could taste hints of smoky marinade and black pepper, which went perfectly with the natural sweet juices of the beef. The mustard jus, which came with little grains of mustard, added a delightfully savoury kick to the beef. The greens in this dish complemented the beef well. The Padron peppers were crunchy and sweet, with a nice salty char on the outside. The addition of watercress was another surprise— just like the sweet & sour sauce for the Iberico Pork Sirloin— and I enjoyed its savoury yet naturally refreshing crunch. It was time for my favourite course of the day— dessert. The Profiteroles (aka cream puff) looked unassuming, but were filled with milk oolong and chantilly cream. I thought I was done being impressed, but I absolutely loved this dessert, to the point that I’d have eagerly bought home a box of Profiteroles if The Venus had sold them à la carte.

The Profiterole had a crisp crust which melted into a crumb-like texture in my mouth. The hero of this dessert, however, was the milk oolong, which filled the pastry to the brim. Its texture was thick and creamy, but the flavours were light and floral. There were delightful hints of oolong and subtle vanilla, and everything came together in an indulgent manner that rendered me speechless. We ended the meal with our last dessert: Mandarin Peel Madeleines, which came with two pieces of madeleines and a passion orange syrup. I loved that the madeleine looked just like The Venus’ logo, which is a shell! The madeleines were surprisingly soft, with a generous amount of tiny air pockets on the inside, and had a sponge-like texture that had notes of butter and mandarin orange. The passion orange syrup was sharp and fruity, giving the pastry a well needed zesty kick.

If you’re coming here for date night, you can pick from The Venus’ à la carte menu instead. Top recommendations include the signature Venus Scallop (S$28), which comes with ginger garlic chives oil and a sesame shoyu glaze. Be sure to whip out your phones for this dish, as it’s served in a glass dome filled with smoke!

End your date night on a sweet and indulgent note with The Venus’ signature Dark Chocolate Mousse (S$22), which is made with 66% dark chocolate and served with berries coulis, buckwheat crumble and vanilla sauce. The berries coulis, which resembles ice cream, is made on the spot for that impressive touch. 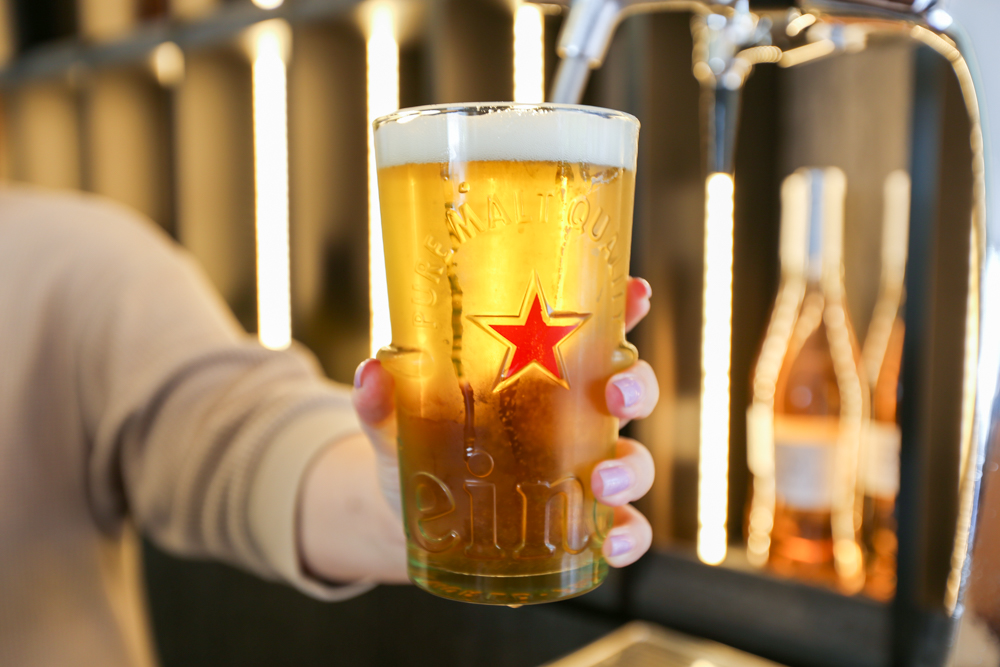 Craving a pint of ice cold beer to battle the afternoon heat? Grab a pint of Heineken at just S$8 or a glass of House Wine (S$10 per glass) with any lunch set, while non-alcoholic drinkers can choose to go for a cup of Coffee/Tea (S$5) instead. Dining at The Venus was such an intimate experience. For those few hours, I soaked in its romantic and lavish vibes, and enjoyed its French cuisine which came with familiar Asian touches.

Highlights of my meal included the Angel Hair, Black Angus Beef Ribeye and Profiterole, and I’ve got to say, its set lunch meals were relatively affordable given its quality. I’d definitely consider coming back here if I was ever looking for a sleek yet cosy restaurant for lunch or dinner dates, so you can bet that I’m bookmarking this gorgeous French restaurant for future occasions!

* This post was brought to you in partnership with The Venus.