Now that the famous Cha Chaan Teng chain Tsui Wah (翠華) has opened its doors on 15 June 2018 at Clarke Quay, we can join in the fun! 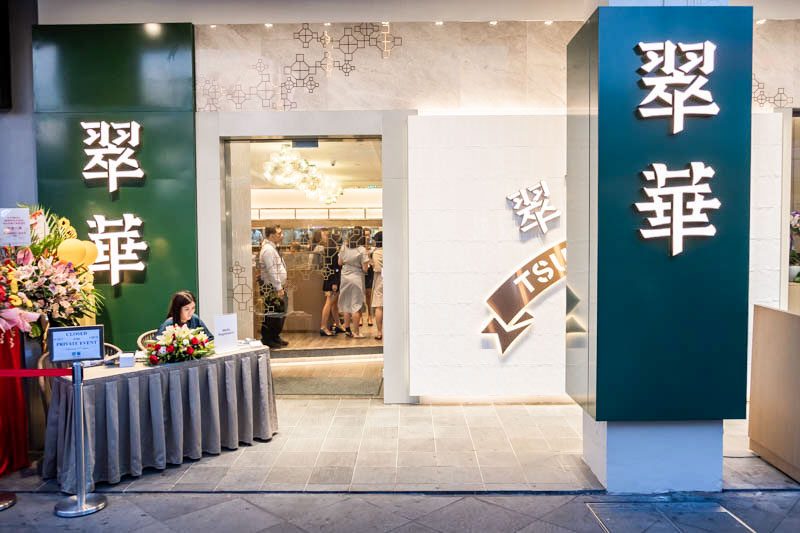 Known for traditional Hong Kong delicacies of great quality and value, the eatery has made its way to our shores thanks to Tsui Wah Holdings Limited and Jumbo Group Ltd who believe in sharing these classic flavours with us.

To ensure as similar a dining experience as possible, the culinary team behind Tsui Wah Singapore underwent training by chefs from Hong Kong. 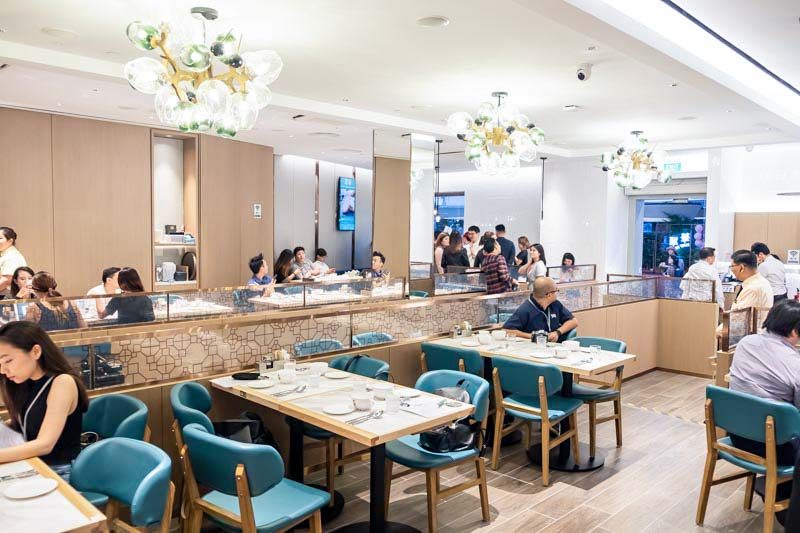 The space features over 140 indoor and alfresco dining seats with a contemporary flair, showcasing turquoise seats and marble tables under the bright, green-tinted chandeliers. 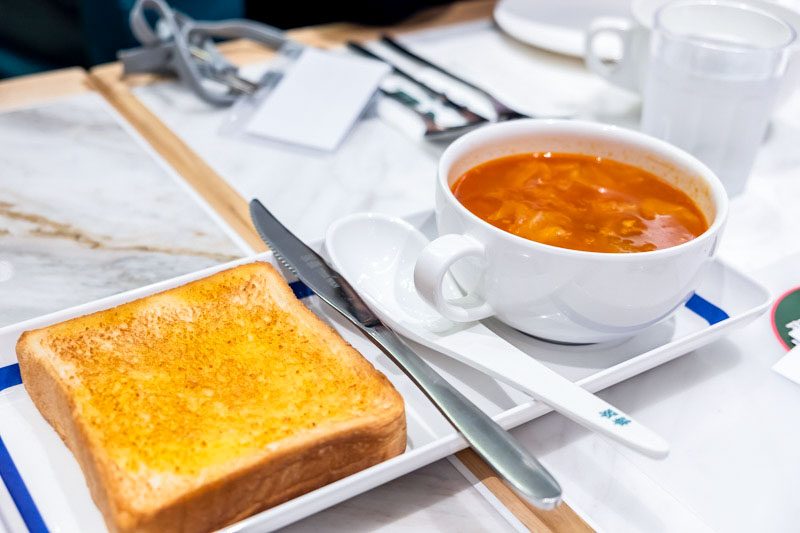 Soon after we were seated, the Borscht With Thick Toast ($5.50) came displayed in a row. A buttered toast with a nice golden crust and a cup full of steaming soup which gave off a mouthwatering whiff of tomatoes. 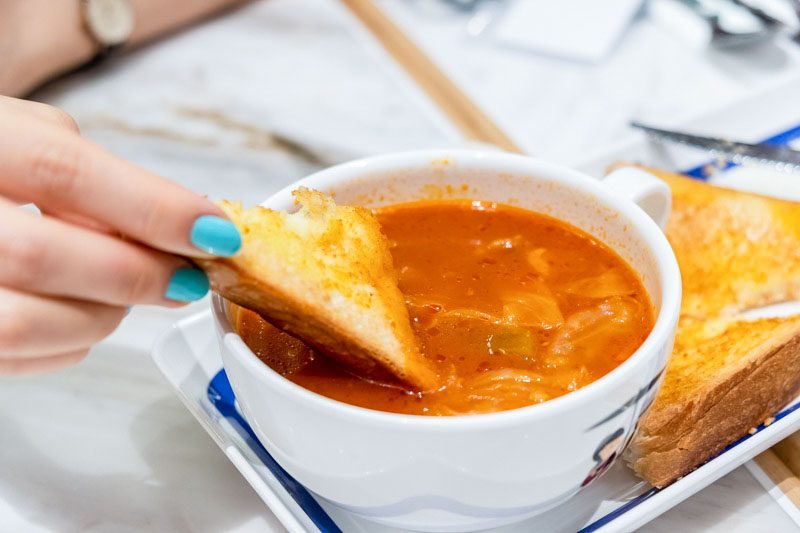 The borscht was stewed for about three hours together with tomatoes, onions, carrots, celery, cabbage and beef chunks. It was sweet and rather plain but a comforting starter nonetheless. Just tear a piece of the toast and dip it in the soup for a heartier mouthful. 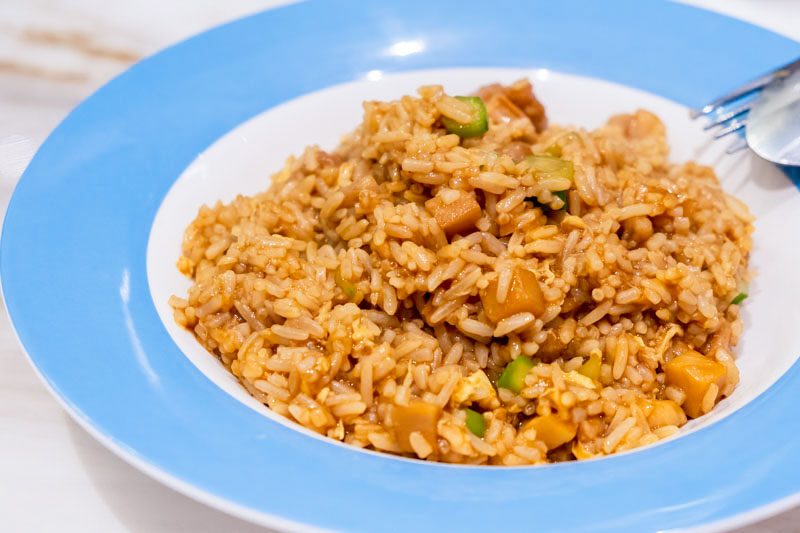 Their so-called take on an “Asian risotto“, the Braised Abalone Rice With Diced Chicken And Kale ($14) had bits of egg, diced chicken and kale which helped mitigate the saltiness of the dish.

The texture of the rice generously slathered in abalone sauce wasn’t risotto-like, yet it had the right balance between moist and chewy, which I enjoyed. 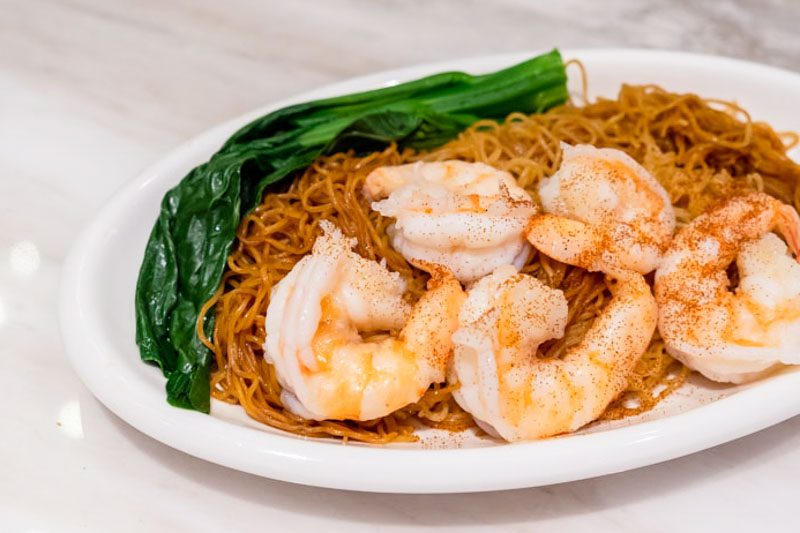 And of course, what’s a Cha Chaan Teng without a noodle dish? The King Prawns In XO Sauce With Tossed Noodles ($11) was touted as featuring meticulously sourced and selected prawns along with a top secret XO sauce.

For those who might find the noodles too dry, it comes with a bowl of fish soup that you can ladle out into the dish. 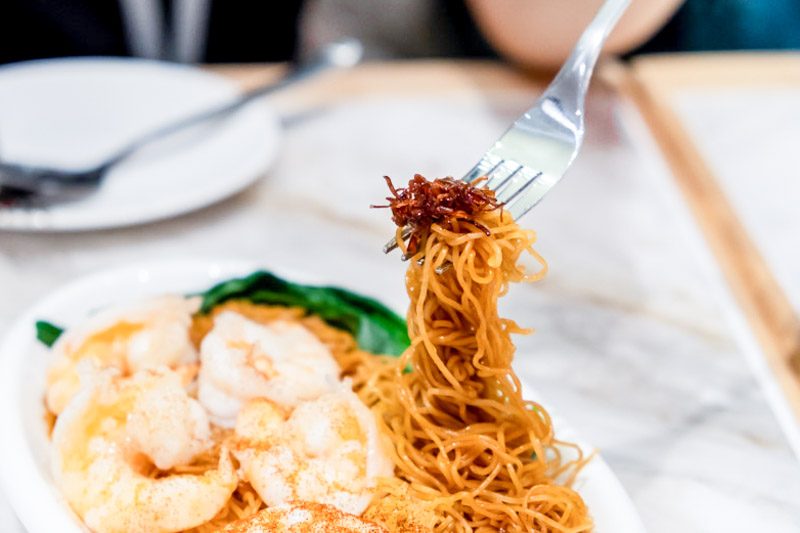 As recommended, I poured the XO sauce over the noodles, expecting an elevation of umami. I found myself tilting my head in confusion as I couldn’t really taste the depth of the secret sauce.

The prawns, however, were plump and succulent, so kudos to the attentive process which goes into selecting these gems. 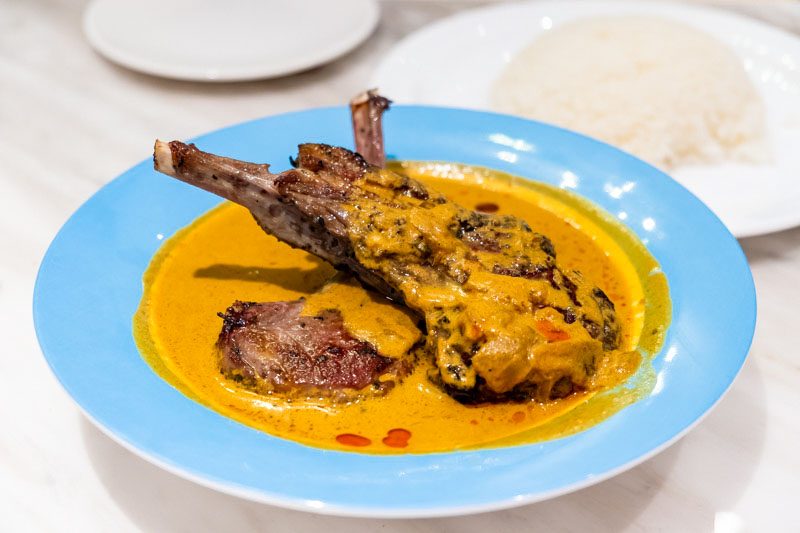 The Lamb Chop Curry With Steamed Rice ($29) was served with two Australian fresh lamb rack chops lying in a curry sea of 30 spices. Stewed for over six hours, the signature curry was mildly spicy and had a creamy yet gritty texture. 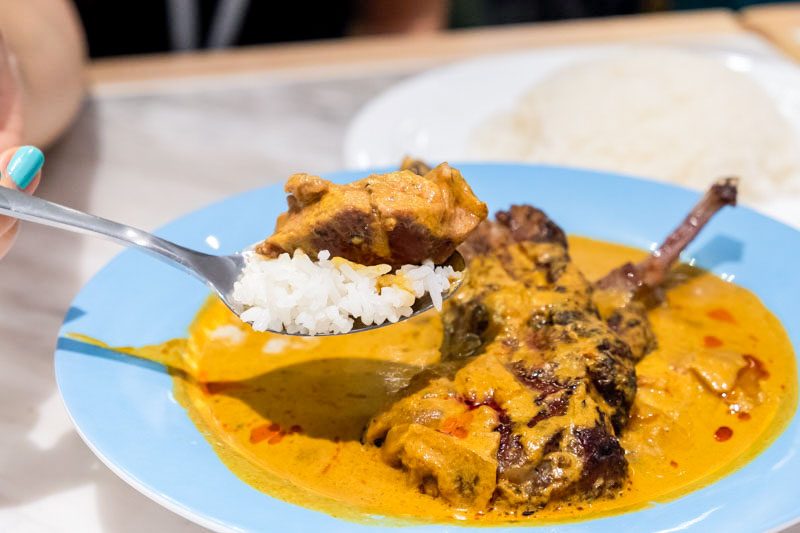 Scoop some steamed rice and place a chunk of lamb infused with the rich sauce on top for a burst of complex and strong flavours. Catering to families, it’s not as spicy as it looks and was quite light on my palate. 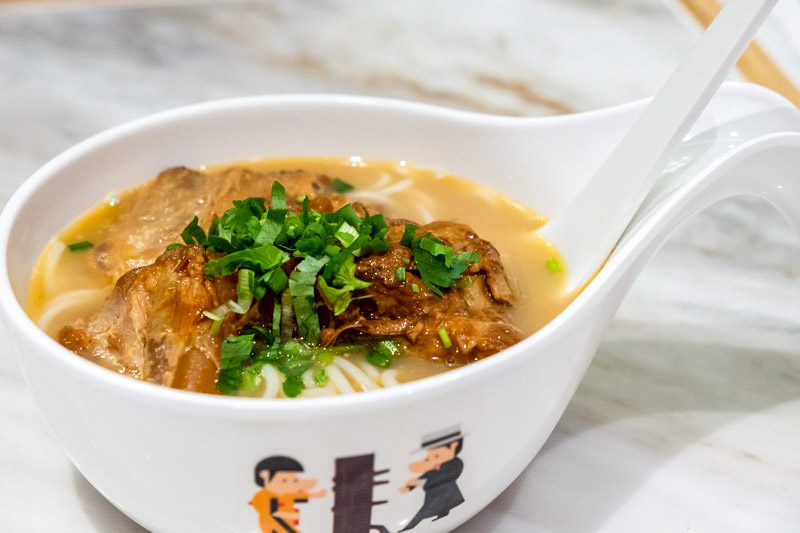 Served in a bowl designed with cute Ip Man characters, the Kagoshima-style Pork Cartilage In Fish Soup With Mixian ($8.50) looked and smelled promising. Having been stewed for many hours, the tender pork cartilage broke apart easily and melted on my tongue. The mixian were thick and springy in the opaque soup, which somehow reminded me of bak kut teh given its peppery flavour.

This pork noodle soup was my favourite of the menu and would’ve been perfect on a cold, rainy day (I mean, just look at that steam). 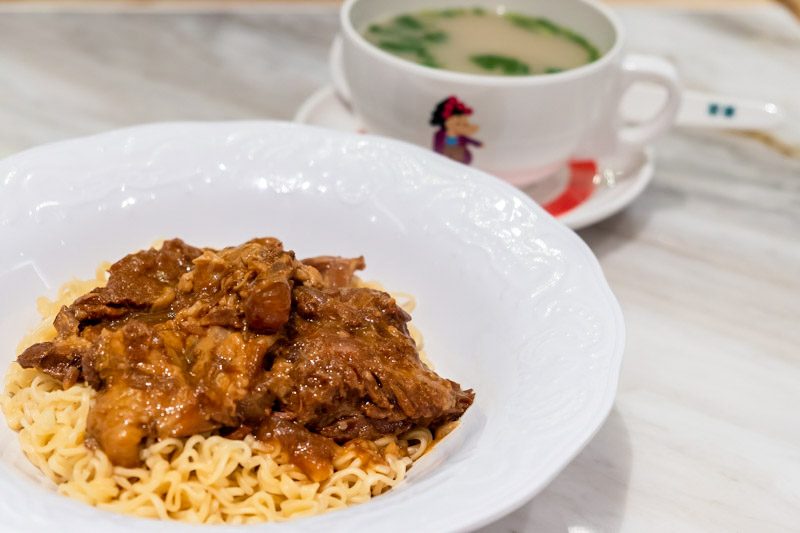 If you’re more of a dry-noodle person, the Kagoshima-style Pork Cartilage With Tossed Instant Noodles ($9.50) is a great alternative. The pork in this dry version was more thoroughly coated with sauce, giving it a stronger taste. 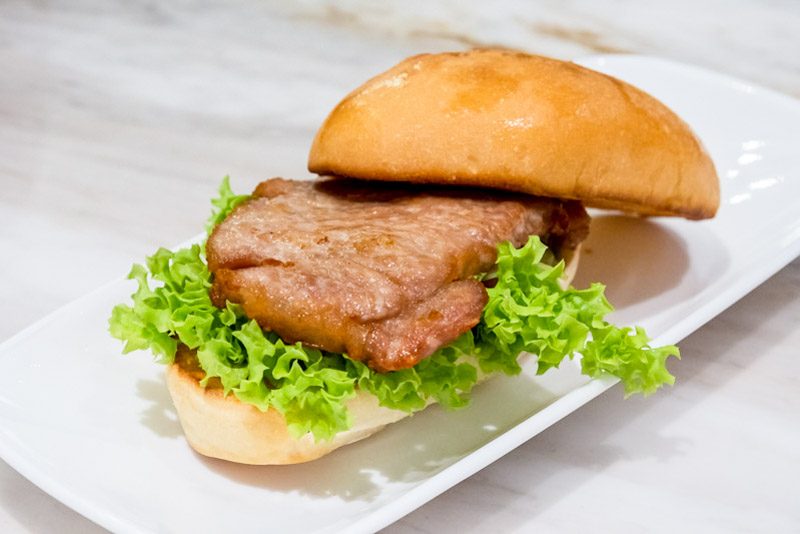 Naturally, I was excited to try this Tsui Wah Signature Pork Chop Bun ($7.50). Sandwiched in between two buttered wheat buns, there was a slab of pork, pickles, tomatoes, house-made gravy and fresh lettuce.

While the pork was sweet and tender with the zesty sauce, it turned out to be quite an underwhelming pork chop bun and I was surprised that it’s one of the signature dishes. 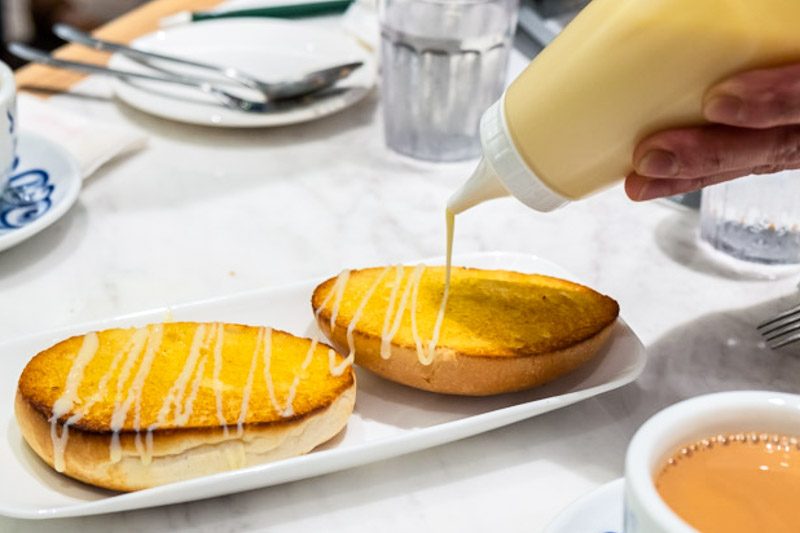 When the Crispy Bun With Condensed Milk ($4) came, the chef drizzled condensed milk from the bottle onto the buttered surface — making it 1,000 times more enticing (okay, I may have exaggerated, but I couldn’t wait to sink my teeth in).

The buns were indeed crispy, living up to the dish name and would be a nice, simple treat. Just make sure to eat them while they’re still hot. 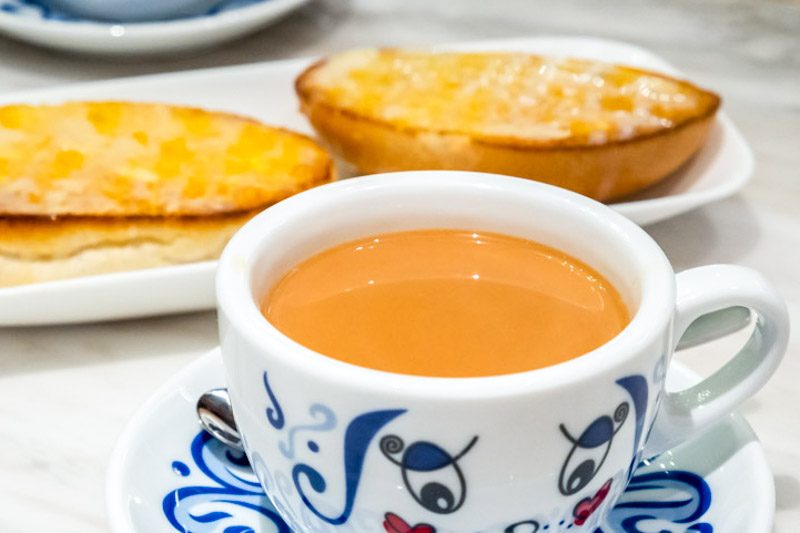 The Hot Milk Tea ($3.50) came right on time with the desserts, leaving a trail of the bittersweet aroma of Ceylon tea leaves. Served in the iconic cup, the milk tea smoothly glazed over my tongue with a mild sweetness and stronger bitter notes.

I enjoy my milk tea with no sugar, but you can add some for more indulgence. 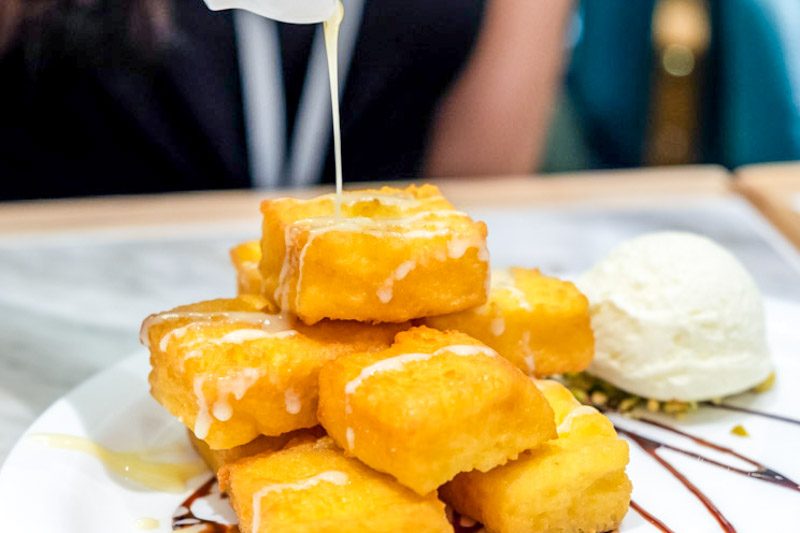 As if one dessert wasn’t enough, we also had the Savoury French Toast Bites Served With Vanilla Ice Cream ($9.50) that was oh-so-sinful.

Upon ordering, the toast is freshly prepared and cut daily, which results in airy french toast bites. The ice cream with pistachio bits paired well with the toast, offering a fun contrast between hot and cold. 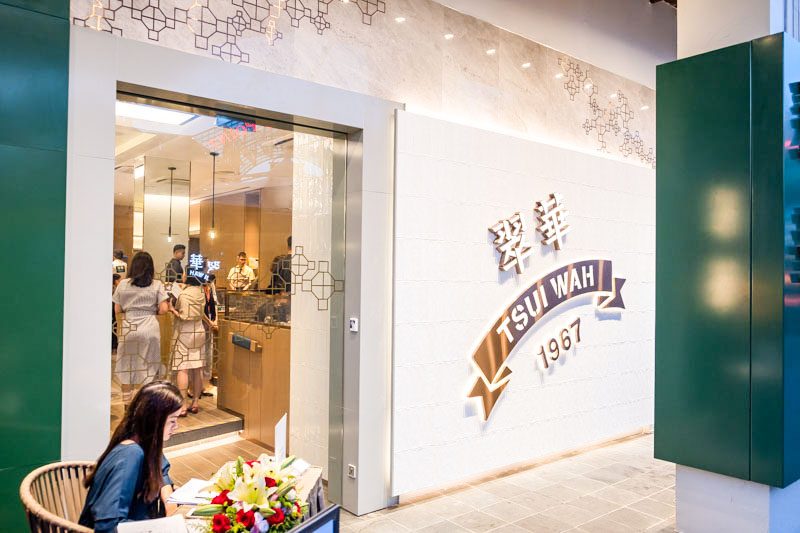 I wouldn’t say that Tsui Wah offers gourmet dishes that are that exciting on the taste buds, but you’ll definitely have a comforting, casual dining experience. Besides, now you don’t have to fly all the way to Hong Kong to keep your Cha Chaan Teng urges at bay!