Matsuya Dining: A Conversation With One of Singapore’s First Japanese Chefs Along Beach Road

I don’t have to tell you how much we adore our Japanese food, the frenzy that follows when a new Japanese restaurant chain opens is a testament to that. Be it kaiten sushi chains or famous ramen joints, making their debut on our sunny shores, we welcome them with open arms.

A way to ensure yourself endless sushi rolls and amazing deals would be with the GrabPay Dealbook! Not only does it foster our undying love for Japanese food but promises great prices too— more on this later.

When it comes to Japanese food, I’m a little bit of a purist. Don’t get me wrong, while I do appreciate the new-fangled Japanese fusion that has dominated as of late; I’m more for classic Japanese dishes that are lighter and cleaner on the palate. 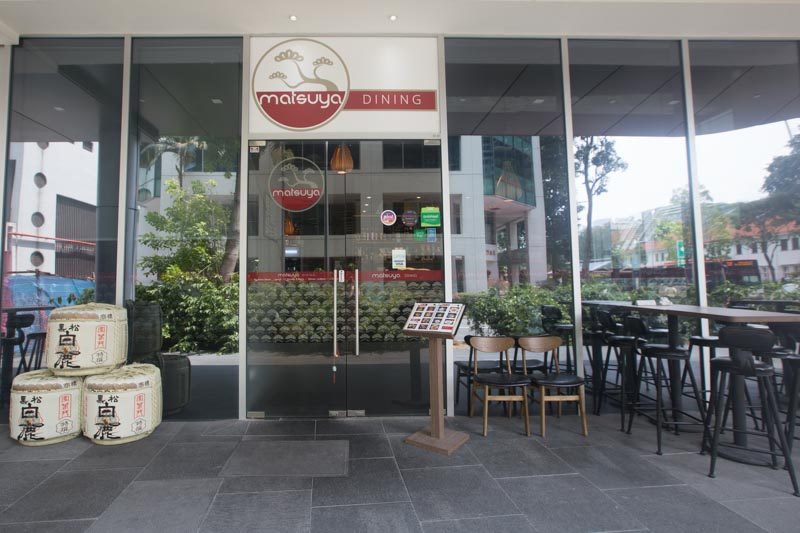 One such restaurant where you can find quintessential Japanese cuisine would be Matsuya Dining, sitting on the corner of Beach Road. 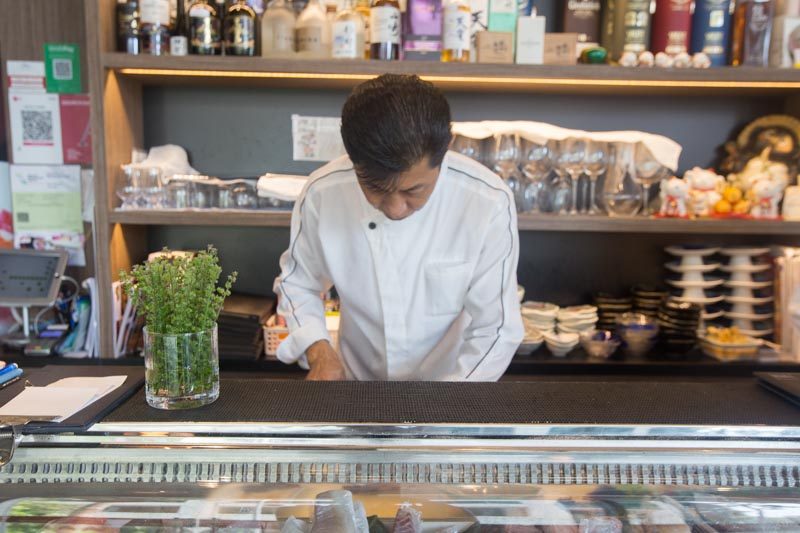 Matsuya Dining is helmed by Chef Benson Tan, or more affectionately known as ‘Ah Ben’ to longtime patrons and devoted fans of Chef Ben. Having been in the restaurant business for more than 30 years, you can often find Chef Ben poised over the counter preparing delectable omakase courses for hungry patrons. 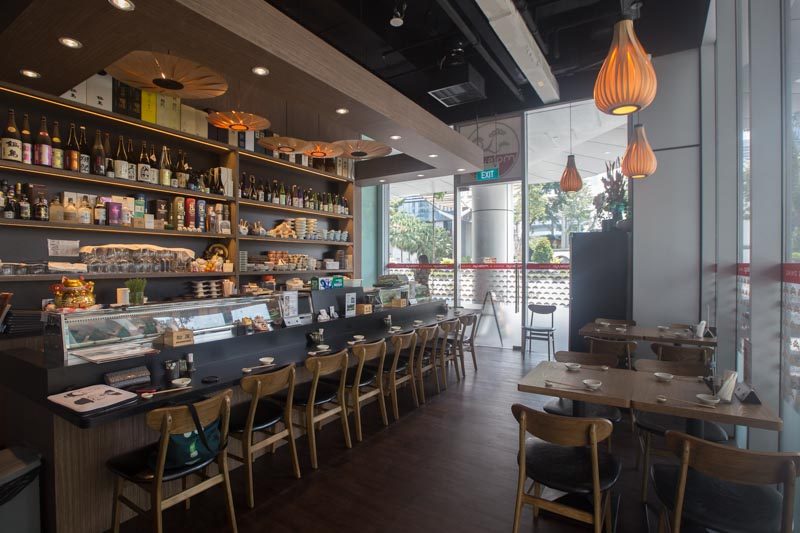 Matsuya Dining is furnished simply with floor-to-ceiling windows with the afternoon sunlight flooding through the restaurant. A simple, no-frills joint that doesn’t put on any airs; what you see is what you get with Matsuya Dining. 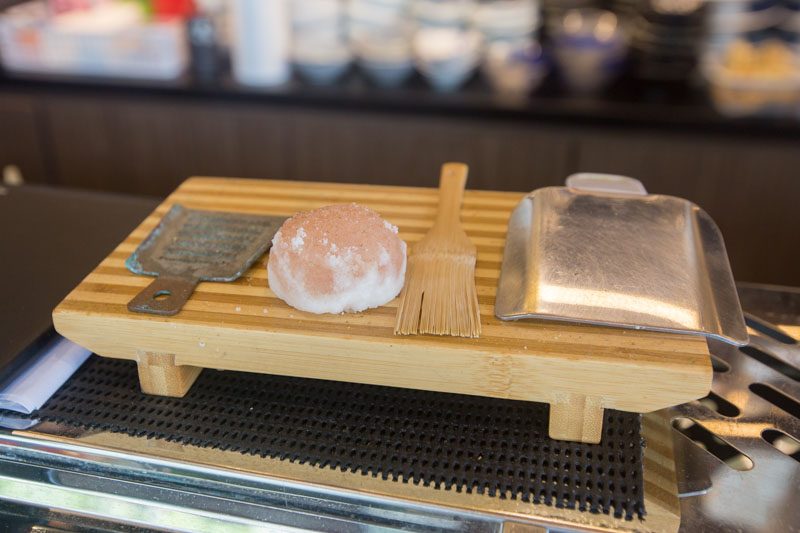 As I got to chatting with Chef Ben, I find out that he started his foray into Japanese food when he was fresh out of National Service. As with the life of any young apprentice, it was rough in the beginning. The Japanese chefs at that time only spoke Japanese, so apart from trying to master the intricacies of Japanese cuisine, Chef Ben also had to pick up some basic Japanese as well. Fast-forward 30 years, after working at a couple of restaurants, and here he is with Matsuya Dining.

Matsuya Dining is Chef Ben’s fourth restaurant so you can be sure he knows the ins and outs of running a Japanese Restaurant.

Chef Ben suggested that I try the Mini Omakase Lunch that consisted of five courses that came up to S$48 a set. Ever excited to try what Matsuya Dining and Chef Ben had to offer, I awaited each course eagerly. 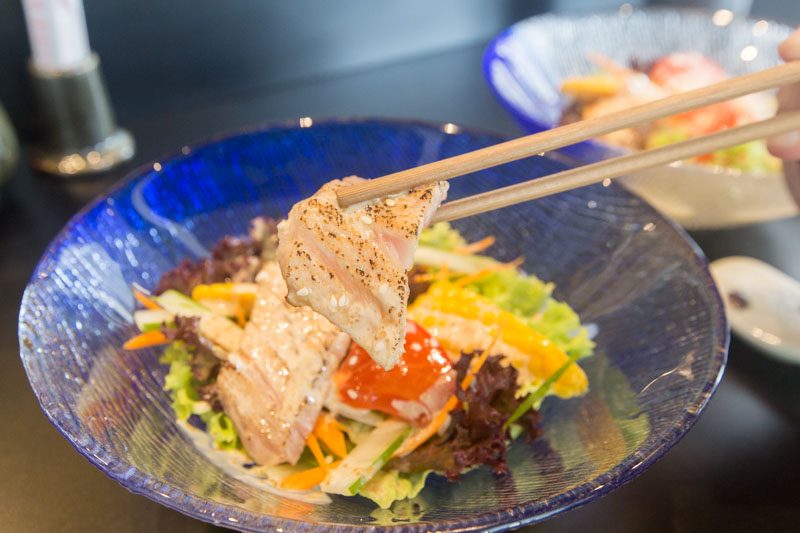 We started with Kobachi, or side dish, which was a simple salad with two glorious slices of Torched Tuna Belly. An upgrade from your typical salad for sure.

These torched tuna slabs were nicely charred, smoky and buttery to a fault. With a fatty fish such as tuna belly, one of the best ways to enjoy it besides having it raw is to torch it or aburi-style. That way, the fat gets partially cooked and melts in your mouth the moment it hits your tongue.

The vegetables were fresh, sweet and balanced the fattiness of the tuna belly quite well. A straightforward starter that certainly whetted my appetite for the other dishes ahead.

Sashimi has always been a long love of mine; there is nothing more satisfying than a plate of gleaming cuts of sashimi. For Matsuya Dining, you get generous, thick slices of Tuna Belly, Amber Jack, Flounder, Salmon and a chubby Scallop puck.

Chef Ben tells me that they get their fish delivered straight from Tokyo twice a week so you can be sure that you are getting quality fish. 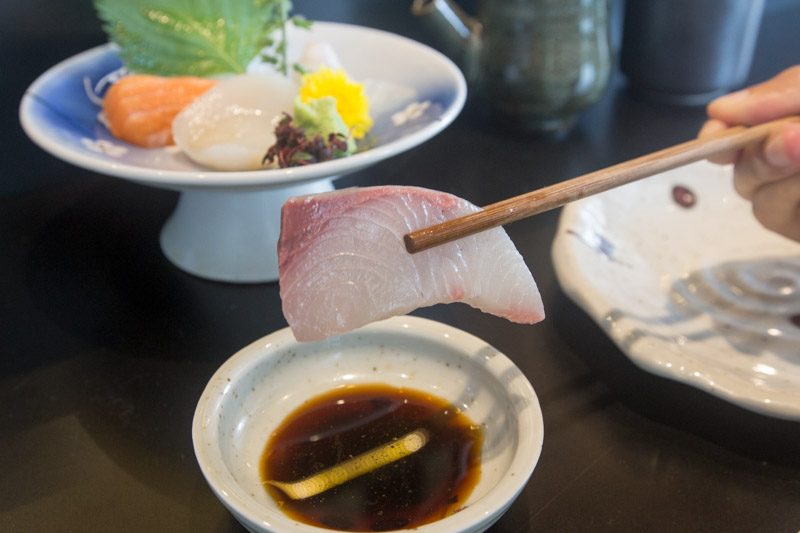 As a bona fide Japanese food lover and an even more ardent devotee of sashimi, kanpachi has to be one of the more underrated sashimi cuts to me. Kanpachi, or amberjack, is a lean and delicate fish with a slight pink hue that is almost translucent in colour.

All you need is just a little lick of wasabi, and you’re good to go. Matsuya Dining’s kanpachi was sweet and mild-tasting. A pleasant little palate-cleanser from the heavier-tasting chutoro. Next, we have the grilled items or Yakimono, which was a crackly and crispy Fresh Salmon Collar Grill. For a little zing, I drizzled a little lemon over the fish to cut some of the richness. The meat was juicy, flaky and flavourful. I especially liked how the skin was finely salted, balancing the fattiness of the collar. The meat fell cleanly off the bone with little resistance, making this a satisfying dish indeed. 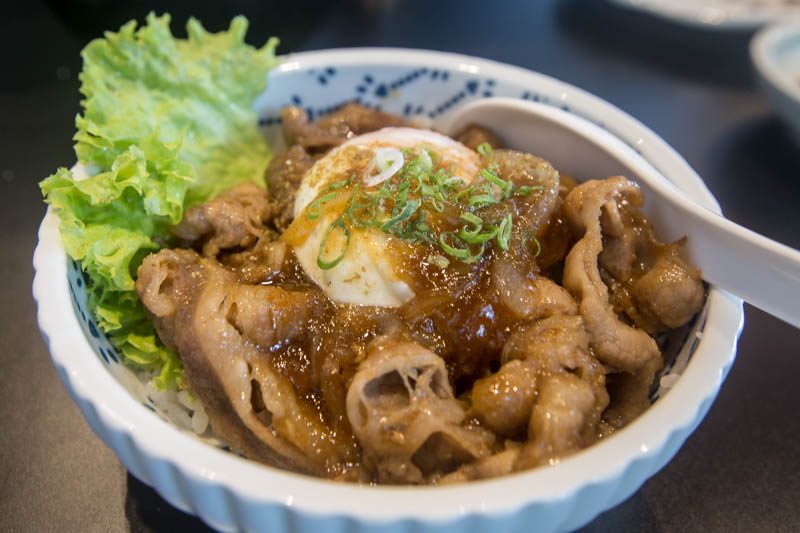 For the meat portion of our omakase set, we were presented with the Stir-fried Beef With Half Boiled Egg, with a wobbly onsen egg sat nestled in between savoury ribbons of beef. As with all onsen egg dishes, there is no greater satisfaction than breaking that precariously thin membrane and watching that liquid gold slowly ooze out. 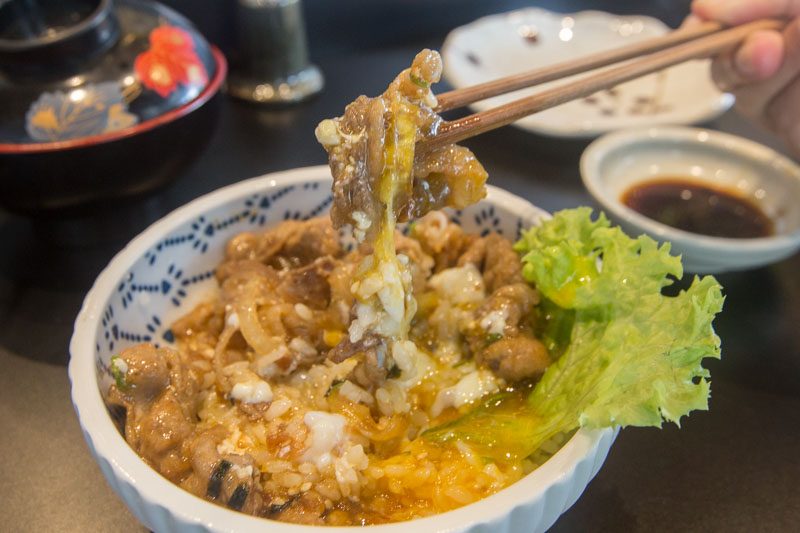 To round out our meal, we were served a Mix Mushroom Clear Soup. The soup was another miss for me. The soup was a little bland and did nothing to bring out the umami of the medley of mushrooms.

As we finished our omakase course, I continued my conversation with the affable Chef Ben. As we got to talking about his career path and how the Japanese food scene has changed thus far, he remarked that there was a certain stigma when it came to local Japanese chefs.

Most of us would be more partial to Japanese-speaking chefs, seeing as they hail from Japan, leading them to offer their seal of approval and authenticity. However, most of the time, as Chef Ben has observed, these chefs are only proficient in one skill set such as tempura for example. 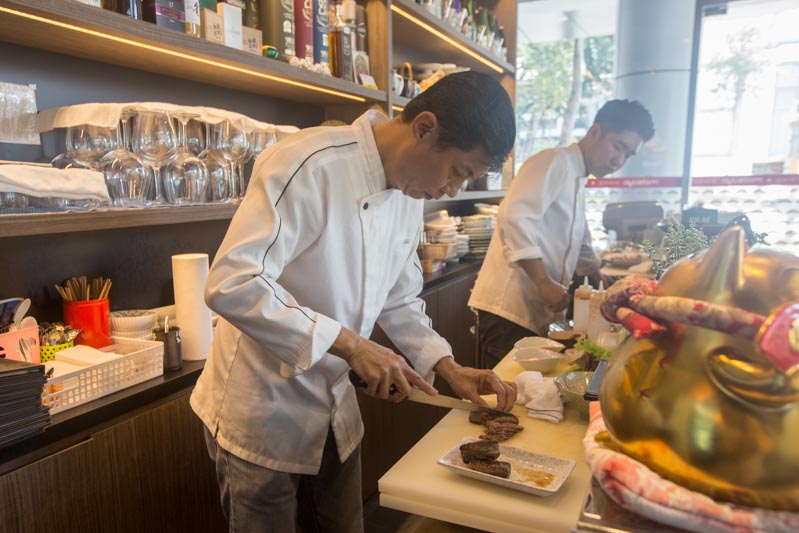 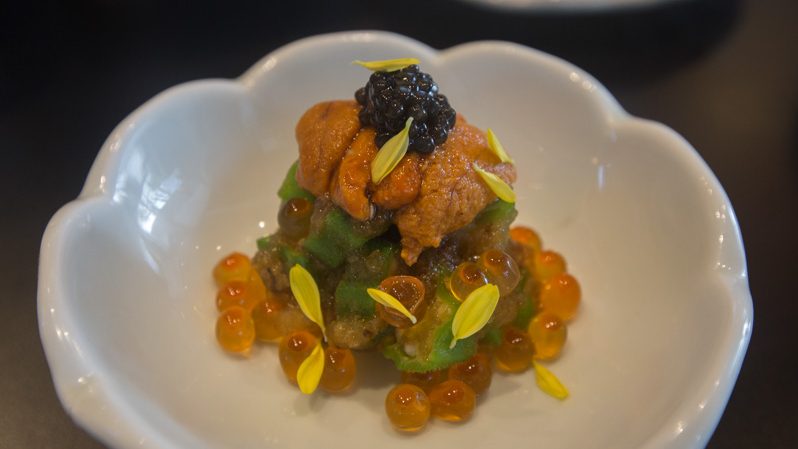 Chef Ben then pauses and tells me I have to try one of his signature omakase items—the Okura. A special concoction of chopped lady’s finger, ikura, a dollop of uni and crowned with caviar.

A textural delight, with the crunchy okra pieces mingling with the rich, umami-ness of the uni coupled with bursts of brininess from those ikura and caviar orbs.

Chef Ben remarks that this is a lesser-known Japanese dish that is not commonly served. After licking the plate clean, I reckon that more people should know about the Okura.

As I took a sip of hot ocha, I was reminded of the simplicity and artistry that goes into Japanese cuisine. While there were a few misses with the lunch course, I can’t deny the quality and freshness of Chef Ben’s fish. His well-balanced flavours in each course are an indication of his years of experience.

In an unforgiving and demanding food scene such as Singapore, one has to learn all aspects of Japanese cuisine to survive and placate our demanding palates.

I know, we can’t help it, we have exceptionally high standards when it comes to food, which is why the GrabPay Dealbook: Gourmet Tribe Edition would be perfect for ever-changing appetites.

It’s quite simple, with this GrabPay Dealbook, all you have to do is pay S$14.90 (usual price of S$30) to enjoy 1-for-1 deals at more than 30 restaurants just like Matsuya Dining. This subscription is valid for six months and will automatically be renewed at the end of the six months, so you don’t have to sweat it when it comes to your next date night.

It only gets better.

These deals will be refreshed regularly so keep your eyes peeled for more exciting deals. Matsuya Dining is just one of the many restaurants that are featured in GrabPay DealBook’s Gourmet Tribe Edition. You can find out more about GrabPay DealBook’s different merchants here. So, subscribe now to Grabpay DealBook and you can live your best foodie life!

ChopeDeals: Save 10% at Matsuya Dining >

*This post was brought to you in partnership with Grab.