This Circuit Breaker is a time for all of us to broaden our knowledge on the various produce our local supermarkets have to offer. After all, it’s the best time to #StayHome and make our own meals!

We’ve brought you multiple articles on the many different types of produce in our series, like rice, sugar, salts, flour and even leafy vegetables! Buckle up, because this is going to be a fiery ride.

This one is for the spice lover. We bring to you: 8 different chillies spice lovers must know.

Of course, before diving into the article, you need to know about the Scoville scale, or the Scoville heat index. This refers to the measurement of the spicy heat of a chilli pepper due to its capsaicin content.

The scale ranks chilli peppers from mild to extremely hot, so from the scale, you can gauge which pepper you’re able to tolerate and which pepper you swear will never touch your tastebuds.

Without further ado, let’s jump right into the world of chilli peppers.

One of the most common chillies used in almost every spicy dish in Singapore is the Bird’s Eye Chilli, widely known as the chilli padi.

A Thai chilli, the Bird’s Eye Chilli may seem small, but don’t be fooled by its size—it measures around 50,000 to 100,000 Scoville units, so it has the potential to be extremely spicy.

These are widely used around Asia in food and are best known for their fruity taste and extreme spiciness. Highly valued in Thai cuisine, Bird’s Eye Chilli is extensively used in an assortment of Thai dishes, including curries and salads.

In Singapore, this is the most common chilli we eat at hawker centres, sometimes mixed into different variations like garlic chilli that is paired with chicken rice. Another customary way Singaporeans enjoy Bird’s Eye Chilli is by cutting it up and dousing it in light or dark soy sauce.

Sambal Belacan is a Malaysian mix of chillies that many Singaporeans hold dear to their heart. Bright red or orange with a slightly runny texture, sambal belacan is a paste-like condiment that goes well with many different types of food, from seafood to vegetables.

It’s not really a chilli pepper, but more of a local favourite contender. The most important part of sambal belacan is the belacan (shrimp paste), to give it its distinct umami taste. Primarily made from finely crushed shrimp or krill with salt, the belacan is fermented for several weeks to achieve the perfect level of umami in taste.

Try using it with seafood like clams (la la) and stingray. One pro tip to get your kids to eat their vegetables is to cook up some sambal kang kong for them—it’s not a surefire way to get them to oblige, but I definitely know it’s hard to resist!

One of the least spicy counterparts of the chilli pepper family, the bell pepper is also known as capsicum, sweet peppers, or just peppers.

Shaped like a bell, these peppers come in multiple colours: red, green, orange and yellow. There are also brown, white, lavender and dark purple peppers in the world, but those are barely used and very rare.

While these are fruits (botanically classified as berries), they are sometimes considered vegetables and side dishes. 94% water and 5% carbohydrates, bell peppers also contain vitamin C. Interesting fact—red bell peppers have more vitamin C content than green ones, so be sure to pick your peppers carefully!

Taking the lowest spot on the Scoville scale, the bell pepper is one of the only members of the chilli family that doesn’t produce capsaicin, which is the substance that causes the hot, numbing sensation we feel in our mouths when we consume chilli. You can spot these in garden salads or as pizza toppings. If you’re looking for a more locally-inspired option, you can find these in kolo yok (sweet and sour pork) as well. Check out our super easy recipe to make your own kolo yok with KFC popcorn chicken if you’re feeling like a chef!

Cayenne peppers are moderately hot, usually measuring around 30,000 to 50,000 on the Scoville scale. Used to add flavour to dishes, these peppers take the form of generic chillies we see when we cook. Typically 10 to 25cm long, these chillies have a curved tip and waxy skin.

These peppers are sometimes dried and ground to make cayenne powder, which is commonly used in cooking flavourful spicy dishes.

It’s believed that cayenne peppers have medicinal properties, and can be used to treat a variety of health problems. Apart from having the ability to aid healing, they’re also delicious and contain a few beneficial nutrients.

People claim that cayenne peppers can help to boost metabolism, lower blood pressure, aid digestive health and help to relieve pain. Research has also shown signs of promise on cancer cells, although it hasn’t been tested on humans yet.

You can slice whole cayenne peppers and add them into your salad. Cayenne pepper spice also goes well with many homemade treats like eggs, fried chicken or even mac n’ cheese.

Most people know this pepper as the Ghost Pepper, but its real name is actually Bhut jolokia. An interspecific hybrid chilli pepper developed in Northeast India, they measure up to 85mm and are up to 30mm wide, in the shade of either red, yellow, orange or brown.

The ghost pepper was certified as the hottest chilli pepper in the world by Guinness World Records in 2007, 400 times hotter than Tabasco sauce. Rated at 1 million Scoville heat units, the ghost pepper was definitely not one to be toyed with.

Ghost peppers are used in both fresh and dried forms to add spice to an assortment of different foods like curries, pickles and chutneys. Many people enjoy ghost peppers with pork or fermented fish.

Chilli grenades were also created by the Indians as a nonlethal way to control rioters. Fun fact: in 2015, they successfully flushed out terrorists who were hiding in a cave with said hand grenades. 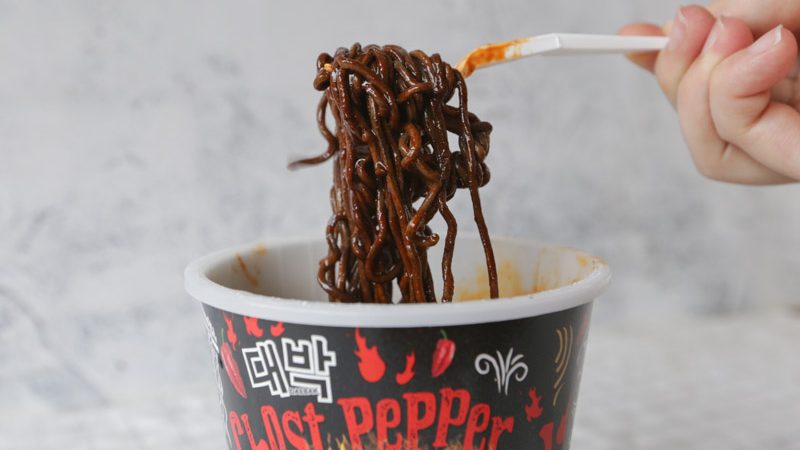 Singapore, unfortunately, doesn’t carry ghost peppers, but we do have ghost pepper-flavoured instant noodles and Mamee snacks! You can also purchase the sauce on Heat Pantry if you’re brave enough.

Ever wonder what that green chilli served alongside your wanton mee is? Or the ones that come in saucers with your beef hor fun? These are pickled green chillies, made by pickling green chilli peppers in vinegar.

These don’t classify as peppers, but I wanted to include these in so you know what you’re eating when you’re having it with a steamy plate of wanton mee. You can even consider making your own pickled green chilli!

Similar to the cayenne pepper, green chillies are also pain relievers, and a great digestive aid. They are also proclaimed to be loaded with vitamin C and have the ability to combat sinuses.

Typically a condiment, pickled green chillies are often served diced up in soya sauce. It’s common to see this served alongside various zi char like hor fun and wanton mee.  You can also find it in special green chilli dishes like barbecued fish.

Originating from the Amazon, the Habanero pepper is widely produced in Mexico. It has thin, waxy skin and turns into a bright red or orange shade when it’s ripe. Although rare, it can also turn white, brown, yellow, or purple.  It is generally 2cm to 6cm long, and is rated 100,000 to 350,000 on the Scoville scale.

These peppers thrive in hot weather. The pepper bears a slight citrusy and smoky flavour on top of its spiciness, and it’s probably the hottest pepper you can find fresh off grocery shelves. It may sometimes cause chilli burns, so you might want to use gloves while handling this spicy fruit.

The Habanero pepper’s heat and floral flavour make it extremely popular in hot sauces, powders, and rubs. They normally accompany Mexican food, in the form of puree or salsa.

A medium-sized pod-like pepper, the jalapeño is typically about 5cm to 10cm long and 25mm to 28mm wide. These are commonly picked and eaten while they’re still green, but sometimes they’re fully ripe and bear shades of red, yellow or orange.

A jalapeño is 92% water, 6% carbohydrates, and 1% protein. Their heat levels can vary from mild to hot depending on cultivation and preparation, measuring from a few thousand to over 10,000 Scoville heat units. Even from the same plant, the heat levels of each jalapeño may vary.

I’m sure you’ve had jalapeños before in your life, and you know how common it is in many Western dishes. You can stuff hollowed-out jalapeños with seafood, meat, or cheese. Chipotles are also smoked, ripe jalapeños that are used for seasoning. Jalapeño poppers are also an extremely popular appetizer.

I consider the jalapeño to be a pretty universal pepper even though it was cultivated in Mexico, because it’s no stranger to the Southeast Asian market. You can find these commonly served in Vietnamese pho and banh mi as well.

Now that you’ve figured out the difference between the various chillies that are most commonly found in Singapore, you’ll definitely know what you’re eating the next time you’re having a nice hearty meal outside.

Better yet, if you decide to cook your own meals at home during this Circuit Breaker, don’t hesitate to opt for the healthier option when you’re deciding on which chilli you should use with your delectable homemade meal. Keep in mind the Scoville heat scale if the spiciness of the chillies are your highest priority.

If you’re looking for some cooking inspiration, be sure to check out some of our stay-home recipes. Bon appétit!